Digestion is an important part of the digestive process. It is an essential process in breaking down the foods into nutrients. The body gets the needed energy from the nutrients from the foods, but these foods should be broken down first into smaller particles of nutrients before they are carried through the blood to the cells and organs. Nutrients are also essential for the repair, growth, and production of body cells. If the body fails to digest the foods properly, it will also become hard for the process to break down the nutrients into vitamins, fats, proteins, and carbohydrates. Before the blood finally absorbs the nutrients and bring them into each organ, the food, even the water and beverages that we take, will have to undergo a unique process called the digestive process.

The digestive process begins in the mouth, and even before you take the first bite, digestion is already starting the process through the salvation. The salivary glands work through the sensory stimulation, which means that whenever we see, smell, taste, or even think about the food; the saliva starts its process already. The enzymes in the saliva help break down the food into starches. Along with the saliva, the tongue and teeth help as well in the digestion process. As the food enters the mouth, it is essential that you chew them carefully and thoroughly so that it can easily pass through the GI or gastrointestinal tract.

After chewing the food, the next step is to swallow it. The chewed food will enter the esophagus, a long, muscular tube that starts from the mouth down to the stomach. A series of contractions happen in the esophagus as the food reaches the stomach, and this muscle movement is called the peristalsis. This movement pushes down the food into the stomach slowly. Based on clinical researches and studies, there are millions of bacteria in the digestive tract, and they are helpful in the proper digestion of the food we eat. The presence of these probiotic bacteria in the entire digestive system allows the system to function well, thus resulting in an improved body health condition. As the healthy bacteria increase in population, they ousted the harmful bacteria that might affect the health of the body.

Part of the esophagus is the lower esophageal sphincter or the LES, which is located at the bottom part before the opening of the stomach. This is a ring-shaped muscle that opens and closes to keep the food there just before it enters the stomach. If it does not function well, it will cause reflux and heartburn. 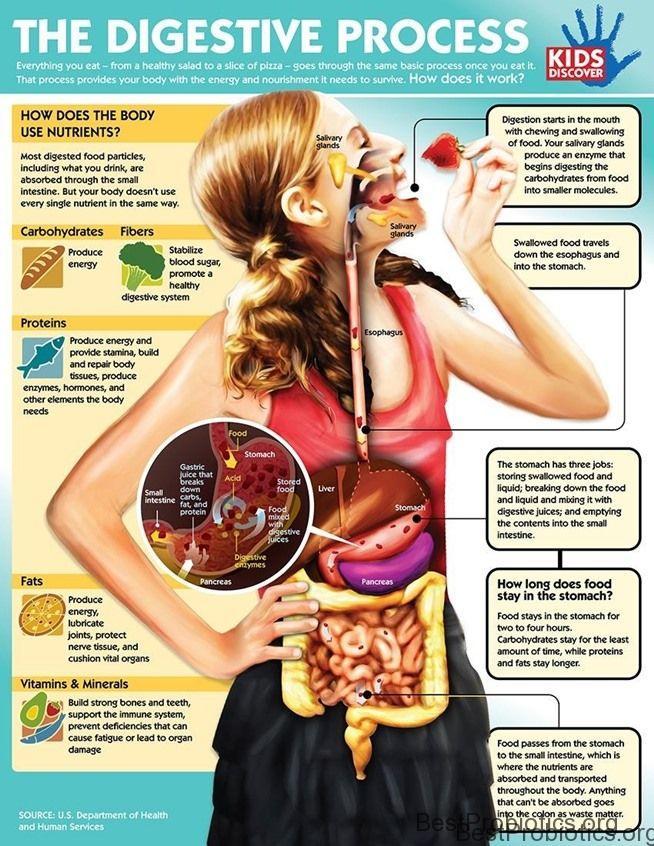 Next to the esophagus and inferior to the diaphragm is the stomach. It is located on the left side of the abdominal cavity, and it has the size of two fists. The stomach is a muscular sac designed to store the swallowed food and drinks. With the help of the digestive enzymes and the hydrochloric acid in the stomach, it can digest the food slowly.

Being designed to do its primary function, which is to absorb nutrients and minerals from food, the small intestine is made up of three segments, the jejunum, duodenum, and ileum. The duodenum is the first part of the small intestine and is shaped like the letter C. The jejunum is the midsection that is coiled. The ileum is the last section, and its end is connected to the large intestine.

Millions of microscopic and finger-like villi cover the inner wall of the small intestine. The body absorbs the nutrients through the villi, which makes it an essential part of the intestine and the entire digestive system. With all the types of foods that you eat every day, you may have caused some of the healthy bacteria in your small intestine, especially in the villi, to be disrupted and become imbalanced. When this happens, it will result in poor digestion.

The probiotics and prebiotics are very helpful in replenishing the small intestines with the good bacteria. By taking probiotics daily, you will not only help your body in its digestion process, you will also help the good bacteria over-populate the bad bacteria in your body. And because most of the nutrients are absorbed in the small intestine, which are then transported all throughout the body, keeping the small intestine properly functioning will give you the assurance that the food you eat will be converted into the nutrients that your body need. Just make sure that you are choosing the right type of food so that the intestine will be able to absorb the abundant amount of nutrients to supply to the entire body.

The large intestine has these smooth walls, which absorb the water and the vitamins from the fecal matter. The good bacteria living in the colon help in the absorption of nutrients and minerals from the food particles before the colon carries them into the sigmoid colon for feces storage. Since bacteria play a vital role in the digestion process, ample amount of probiotics will keep the digestion process in its proper order.

The large intestine is also made up of three sections or parts, the cecum, colon, and rectum. The cecum has a pouch-shape and it stores the particles released by the ileum. This area usually expands to allow the food to pass through, and the fecal matter being pushed into it will then be pushed into the ascending colon, the second section of the large intestine. The colon is the largest part of the large intestine. From the ascending colon, the fecal matter will be carried to the transverse colon, which will then be carried to the descending colon. The feces will then be carried to the sigmoid colon, the S-shaped colon, down to the rectum. The feces will be stored in the rectum until it is time for it to be eliminated from the rectum. The rectum relaxes during the defecation or elimination of feces from the body. This is the end of the digestive process.

How Long Does It Take For The Digestion Process to Complete?

As individual as you are, your digestion process may come to be different than the other person’s digestive process. There are also certain factors that determine the time for the digestion to be completed. If you take fruits and vegetables that are high in fiber, it may take your digestive system shorter period to complete the process, compared to the time frame of digestion when you eat starchy and sugary foods. Meat tends to break down slowly because it contains less fiber, which is why it is important to always include the fiber in your diet to help ease out the digestion process.

Although the digestion period varies from individual to individual, or from men and women, it actually takes six to eight hours to allow the food to pass through the esophagus down to the stomach. Then it will pass through the small intestine to the large intestine, which usually takes about 24 hours. It may take another day or two for the feces to be eliminated from the body, depending on the type of food.

How Probiotics Can Help the Digestive System?

Probiotics support a healthy and balanced digestive system. Probiotics refer to the organisms like the yeast and bacteria, which are vital to the improvement of the health of the body. In the digestive system alone, there are hundreds of different types of good bacteria that are helpful in the digestion process. These bacteria help the small and large intestine, including the esophagus, to digest the food you eat.